For those of you who voted on Twitter regarding whether I should write about tabletop games or couch cooperative video games, thank you very much.

Since tabletop games won out, I’ll start writing about them regularly. Previously (and I mean 2016!) I wrote a couple of game reviews. That had been my intention originally but I was very derailed.

I’ve been watching “Star Trek: Discovery” in anticipation of the upcoming season, and this put me in the mind frame for this game. Looking through the game collection this seemed like a good reboot for this part of the blog.

So here goes nothing for the card game Redshirts.

Here we go- I’ll rank it on Accessibility, Mechanics, and Engagement.

Redshirts’ tagline is, “To discover hazardous new planets. To contact psychotic civilizations. To eliminate your crew like no Captain has done before”.

This is a riff on the oft quoted mission statement of the Star Trek ship, the U.S.S. Enterprise. The Original Series and The Next Generation both began with swelling orchestration and stunning space images* as backdrops to the words:

Space: the final frontier. These are the voyages of the starship Enterprise. Its five-year mission: to explore strange new worlds. To seek out new life and new civilizations. To boldly go where no man has gone before!

In the spirit of inclusivity, by Patrick Stewart’s tenure as captain, the ending words were changed: “to boldly go where no one has gone before”.

*The Original Series has been remastered and the effects have been much improved since when I first watched it as it aired on the ScyFy channel.

The premise of the game revolves around the trope that redshirts (extras wearing a redshirt) die easily on Star Trek. In that iteration blue shirts were science and medicine, yellow was command and helm, and red was engineering and security. It does seem like wearing a redshirt makes one at risk, but this has been disproven as statistically wrong.

Each player “captains” a different ship and crew. To win the game, they must eliminate all of their crew cards by sending them on missions where they cannot succeed. Your opponents, however, may assist you once a mission is declared by providing equipment, location, or event cards from their hand or even utilizing some of their crew to help.

Below I’ve showcased various types of cards, but they would not be played in this layout.

There are some iconic Star Trek moments mentioned, and some general science fiction inspirations.

The art style of the cards reminds me of Sev Trek, an Australian parody I stopped reading a *long* time ago. 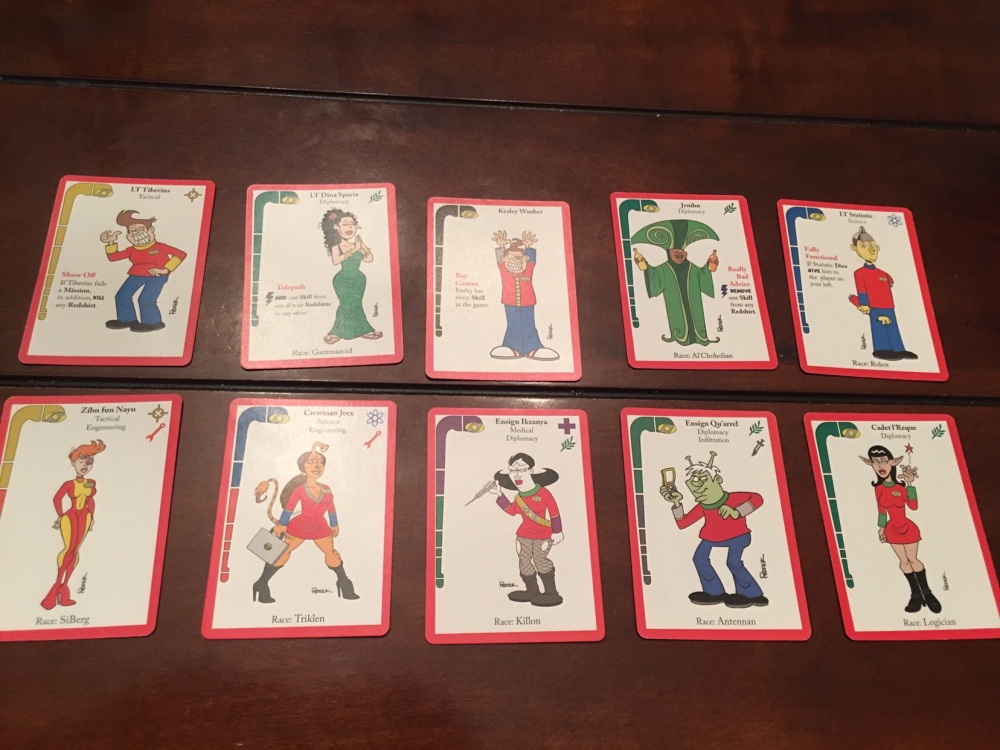 Much of the humor is tongue in cheek.

I find this game to be a lot of fun and will rate it on several categories: accessibility, mechanics, and engagement.

I love this game BUT if you’ve not seen at least the movie reboot, then this game probably won’t appeal to you.

If you’ve watched The Original Series, The Next Generation, Deep Space Nine, and Voyager then you will be able to appreciate all the nuances of this game. Despite the release date of 2013, the 2001-2005 series Enterprise doesn’t seem to be referenced.

You can definitely still have a good time playing the game, but you won’t appreciate the humor.

Also, this game is probably not suitable for children. The humor features over the top cleavage, mini skirts (after all, The Original Series was fond of flashing female flesh), and some alcohol use.

It’s a simple enough game with some of the backstabbing elements of Munchkin. The game does need some strategy but it’s not entirely luck of the draw: as an acceptable action within each turn you may tap a redshirt character card to “go to the ready room” to discard and swap out cards.

This game works as well with two players as it does with seven. Although, with seven, even the deluxe game feels like it could benefit from additional cards. Maybe I need the expansion?

Even with seven players, it’s still not (usually) a drag to wait until your turn. Once each player declares a mission attempt and why the crew member attempting it is I’ll prepared, you have the opportunity to play cards. However, you have a five card hand so you do have to be strategic.

I will admit that we have played with a few people who were *sure* they were going to win. When they didn’t, they were spoil sports, so my goal of winning changed to ending the game. This has not typically been the case.

Sore losers, beware: this game can be unpredictable for all your conniving and careful planning.

This game is a lot of fun for the right group. I do think it has definite replay value since it is unpredictable. To win, you do need to be ruthless and tenacious, however.

Pick it up on Amazon. You know you want it! #notsponsored