The descent into madness can be a short fall for some of us – as easy as the toss of dice.

Enter the world (and Otherworlds) inspired by H. P. Lovecraft in this cooperative dice game. Each player is an investigator with different abilities, strengths, and weaknesses. It’s a race against time to keep one of the ancient elder gods asleep and at bay. 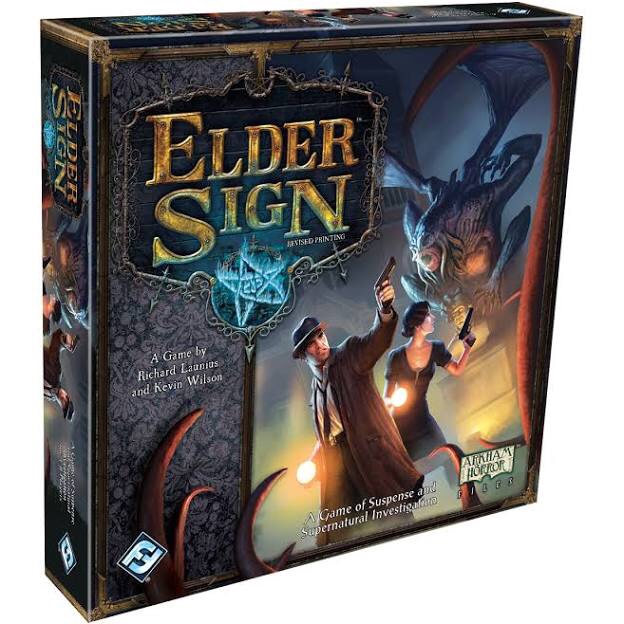 The elder gods of Lovecrafts universe are ancient powerful beings whose very presence causes madness. They are evil agents of chaos bent on consuming existence. Defeating them is so herculean that it’s better to keep them in their slumber. Crazed cultist forces want to watch the world burn, and the investigators in this game work to defeat monsters and gather the elder signs that will save the world. 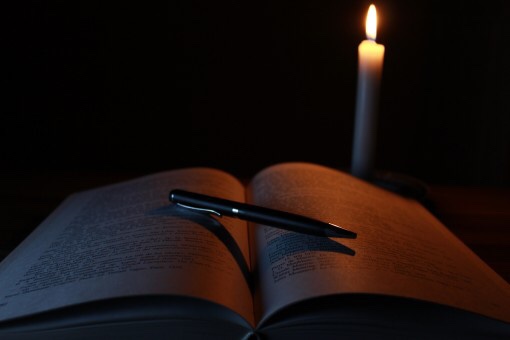 First, A Word about Lovecraft

He was so &*$+€@# racist. Not just to African Americans (though they bore the brunt of it), but to Roma, Italian Americans – basically anyone who was not a New England born and bred Caucasian and like him (a WASP man). He was more subtle with his jabs toward other people, but his treatment of African Americans was ridiculous, vilifying, caricatured, and dehumanizing. It took me out of the stories. It made my blood pressure sky rocket at times. I had to put it down, brace myself for it, and trudge through it. Not every story was like that, but there were quite a few. I stopped reading because… I got a large enough sampling of his literary contributions to speak to his work. I don’t have to read every page he published. This game led me to read his works. I enjoyed it very much, so I figured I should familiarize myself with his work. I knew going in that he was racist. I had a close friend in college whose master’s thesis was on the racism and symbolism of Lovecraft’s work. I did not read that dissertation, but I discussed it with my friend. I was still not prepared for what I encountered.

Someone said they thought the racism made his stories scarier, and it’s my opinion that the person was speaking from a position of white privilege. If you are not the party being oppressed/hurt/silenced, you don’t get to decide what is okay. This applies to everything not just racism.

I can’t deny the impact that his storytelling had on the literary world. He was creative, supportive of other authors, and prolific. I do admire him, but that admiration is tainted. It’s like how I admire Thomas Jefferson, but can’t forget he was kinda rapey especially toward the women from Africa he owned that were forced to warm his bed (but that’s a whole ‘nother can of worms).

I do want it to be known that I am so grateful that new storytellers are taking the universe H. P. Lovecraft created and making something better of it in various anthology books and the Chaosium magazine.

His work was a product of the time, and those were dark days in America – not great days. We’re moving toward a brighter future, but birthing is a difficult, painful escape through a dim hole in this case. Lovecraft was not wholly bad or good, but I won’t make excuses for him. He was a racist and perpetuated harmful ideas.

And now back to the regular programming

This game is one of my favorites but it is also extremely challenging (I’ve lost more than I’ve won).

It’s set in Arkham – a fictional town in Massachusetts- and Otherworlds, like Lovecraft’s work, but the characters seem to mostly be original. The “quotes” on the character cards are not direct from what I could recall, and I read Lovecraft’s work kinda looking for those quotes. This Arkham predates Batman’s. There’s a quaint story that Batman’s co-creator was inspired to make Arkham Asylum after a chance meeting with Lovecraft.

Here we go- I’ll rank it on Accessibility, Mechanics, and Engagement.

This game is not very accessible. Let’s just be honest here. Where with The Fury of Dracula most people are aware of the general vampire mythos, Nyarlathotep is just not mainstream (or most of the “elder gods” for that matter).

Can you play this game and enjoy it without knowing much about the Cthulhu universe?

Yes. I played it many times before reading his short stories.

Does being familiar help?

It seems to add more appreciation in my experience, but my husband hasn’t read Lovecraft’s works and he enjoys it. I don’t think familiarity is a noticeable advantage.

Why rank the accessibility so low?

This game is very complicated. It practically needs a Game Master when being played, and it’s still easy to forget something. There is a clock counting time throughout the game with changing “at midnight” effects. There are different stipulations for different elder gods. Even though I’ve been playing this game for years, there are still times when things trip me up. This is a cooperative game so winning or losing is as a group. It’s still extremely difficult. I think someone said the win rate is about 40/60, and that Arkham Horror (a board game in the same universe) is 20/80. I’ve been told that hardcore fans don’t like these games to be easy.

Due to the complexity and cosmic horror, I don’t believe this game could age down well.

There are various fonts used. The “handwriting” font is particular difficult for me. The text is small and with the coloring, this is probably one for reading and EnChroma glasses.

Cards are placed in front of the player. There are tokens placed on a few of the item cards and the player card. Those with fine hand motor challenges would need someone else to roll the many, many dice. It’s all about the dice in this game.

The mechanics of this game are great, even though there are a lot of moving parts. You start out at a museum and then pick a location to investigate. While there, you roll dice (sometimes repeatedly) to close out the location, but if you fail there are consequences. Winning gives you a reward as listed on the bottom of the card – some cards have easier or harder dice rolls to achieve.

As a cooperative game, there are opportunities to help your fellow players. Sometimes sharing resources is essential in this game. This ability definitely makes it easier.

Elder Signs lets you assist other players (sometimes) with your cards or abilities, so it can be very engaging even when it’s not your turn.

If your character dies, while there are bad consequences, you can often select a new character. It’s a hard enough game to win, but dying makes it even harder. I’d recommend trying to keep your character alive, but that’s not always feasible. I can’t think of any advantages to starting over mid game with a new character.

I gave it only three stars for engagement because the constant high stakes, though intense, can be a little mentally fatiguing in very long games. 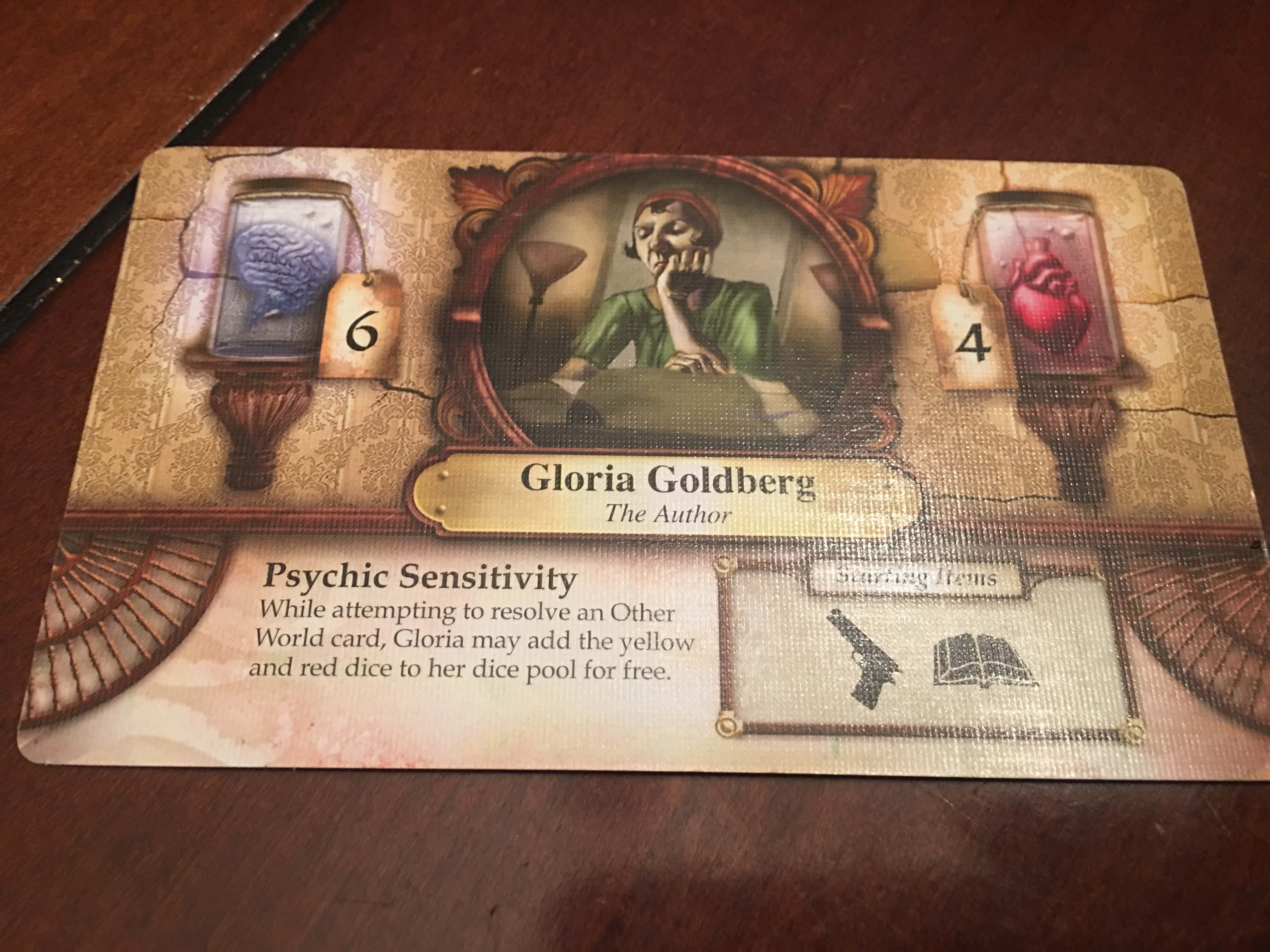 Taking on an elder god is not for the faint of heart, but this game can be really fun. The creators did a great job with it, and I never turn down an opportunity to play it. When we recently played the expansion I said, “bring on the pain”. We all died.

Here’s a video showing how to play it.

One final thought – I recently discovered that for years I (and everyone I know) have mispronounced Cthulhu.